The Frosty Mountain 50K didn’t go as planned. Nope. Not even close.

Coming off a strong training block, I was feeling confident going into the race, even though it was barely a month after the Squamish 50K. My legs felt strong, my back felt stable after months of rehab, and this race was going to be my celebration after a race season filled with ups and downs. In fact, so little were my concerns going into this race that I totally forgot to register until the morning of! 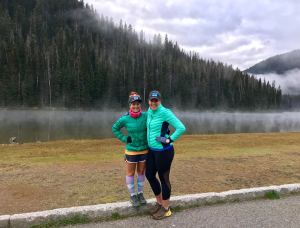 Freezing, but ready to run

Going into Frosty, I had two goals – enjoy the day as much as possible and take lots of photos for Gary to judge afterwards. Perhaps it was because of my laissez-faire approach to the race that led to my false confidence that the race would somehow be easy. I mean, what could be harder than Squamish?

The race profile of the 50K – doesn’t look too hard, right?

The day started early, with a wake-up at 4:30 AM – Manning Park is a little more than a hop, skip, and a jump away. Willa and I arrived while they were still setting up and stayed in the car to keep warm – the temperature was nearly zero. After registering, we queued up on the road, and with a quick count down we were off.

With no pressure to chase down PB’s we started off easy on the rolling single-track that would lead us to the first climb of the day. Although my legs were hard to come by on the climb, I slowly began to loosen up, and took in the scenery. The trail, although not technical, was very steadily climbing upwards to the alpine. Moving slower than I am used to, I had the luxury of really taking in the course, and I found inspiration all around me to keep to my goal of taking lots of pictures, often stopping Willa and Digger Dog for photo ops along the way.

My models for the day

Despite our lolly-gagging, Willa and I were still keeping a pretty solid pace, and I managed to work up a pretty good sweat on the way up, and soon we were in the alpine, and exposed to the elements.

I knew going into the race that we would be reaching an altitude over 2000M, and I also knew that it would likely be cold. I was prepared. My pack was filled with 2 pair of gloves, 2 buffs, a toque, a down puffy, a wind breaker, and a pull-over for just such an occasion. I even packed hand warmers to help ease my Raynaud’s symptoms. Unfortunately, none of the items I packed would be put to use in time to help me.

Now, I could spend hours talking about “what-ifs” and postulating hypotheses about how I managed to become hypothermic despite planning for the cold – maybe if I racing at my normal speed and didn’t stop and start so many times taking photos I would have stayed warmer, maybe if I didn’t see this race as just a “fun run” I would have taken the risks more seriously, maybe if it wasn’t at altitude I would have realized that it was hypothermia causing my breathing to become more haggard and my head to pound, and not the thin air – maybe, maybe, maybe. At the end of the day, it was an error in my own judgement, and my lack of preparation that did me in.

(I should also note, after talking to one of my coaches, Eric Carter, that had it actually been altitude sickness, continuing on still would have been a bad idea – soooo really I messed up regardless)

I could see the summit, and I could see Willa just up ahead of me so I kept moving forward, whispering mantras in an attempt to make the situation better. Although I was whispering “stronger every step” with every breath, the reality was that my steps were becoming more and more shaky. I was scared. I knew my body wasn’t acting normally, and I had no idea why – could this really all be because of the altitude? Not once did it occur to me to put on more clothing. I only put my red windbreaker on halfheartedly when Willa suggested that I might want it for the summit.

Upon reaching the summit, still unaware of what was happening, I made Willa partake in a photoshoot with me – “get a picture of me with the Frosty sign!” I felt like shit, but I wasn’t going to let it stop me from capturing the summit. 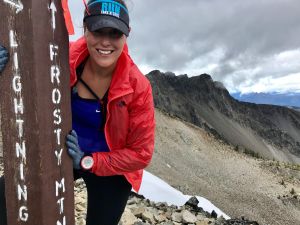 Pretending that I’m not freezing

The descent back to the tree line was short and steep on a sea of boulders. I have never concentrated so hard on not falling in my life. The trembling caused my entire body to shake and safely planting my feet became a huge challenge. Once on “steady ground” Willa pushed me to run. I didn’t want to – couldn’t she see that I was in bad shape? I wanted to sit and regain some energy, but instead I chased her down the mountain. About 30 minutes later I began to warm up. About an hour later I started to feel human again.

“Crazy how much the altitude affected me, eh?” I said to Willa. She looked me dead in the face then and said “Christina, I didn’t want to freak you out, but you were hypothermic up there, and I was really worried.” HUH? Hypothermic? ME?! That was honestly a huge surprise to me. You may be wondering how it got so bad given that Willa knew what was going on, but unfortunately, by the time she recognized my symptoms it was all she could do to force me into clothes and keep moving. Pretty freaking scary.

It was at this time that we discussed options. I was drained. Digger Dog had been stung by 10 wasps. Was it a good idea to keep moving? I was now eating and feeling happy again, but the next climb would have more exposure and it was due to start raining. Did we push to make it happen, and to beat the cut-off, or did we settle in to the rest of the run, and stay true to the intent of the race?

We chose to settle in. At the end of the day, we decided that finishing strong, with a smile on our faces, was more important than proving that we could muscle-on and complete the full 50. The rest of the day, we took pictures, made jokes, and honestly just enjoyed the experience of putting one foot in front of the other in such a beautiful place. 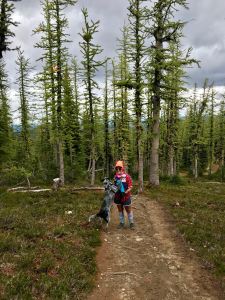 Willa and Digger Dog, posing for me

Crossing the finish line at 27KM we retold our story, and were awarded official finishing times and medals for the 27KM distance. I was shocked. In my head I had already come to terms with my first ever DNF, and now I was going to be an official finisher? Awesome. I guess the RD decided that good decision-making ought to be rewarded. That, and he has a really big soft-spot for dogs. Regardless, it was a very happy surprise. 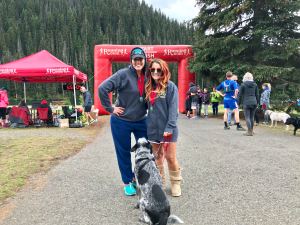 While the day definitely didn’t go as planned, in some ways, it went better. I was humbled by the mountains that I take refuge in so often, and in turn, granted them more respect. I met new challenges within my body, and therefore was given the gift of recognizing new boundaries. I made what was, for me, a difficult decision to quit, and instead of feeling like a failure was embraced with love and understanding from my friends and the race community. I finished the day with a smile, and as a result, not only met my race goals of the Frosty 50K, but lived to race another day. 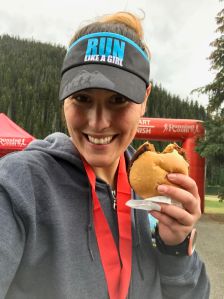 Although my day ended well, I would like to quickly speak to the importance of planning ahead and not venturing into the alpine without understanding all of the risks. Did I know that hypothermia and altitude sickness were threats going into the race? Yes. Did I have all the right gear? Yes. But did I have an understanding of the symptoms of hypothermia, and know what to look out for? No.

I spend a lot of time in the mountains, and have taken courses to broaden my knowledge of the alpine, and yet I was still underprepared. I was lucky that my first experience with hypothermia was in a controlled race environment, with plenty of people to help me, including my friend Willa who is a trained nurse. Had I been alone and in a similar situation, this story could have ended really badly. Please, please, take my story as one of caution and always put your safety first when going into the wild.

Saved by the Trail

Saved by the Trail